The poster boys for Ghana’s new sound, La Même Gang, have released a video for ‘Reveal (Fly You Out)’, their second video from the project La Même Tape 2: Linksters.

Released in December 2018, Linksters is an aromatice sound of a new generation. The 20 track album shows the influence of western music while maintaining a unique Ghanaian style. ‘Reveal’, one of the most popular songs off the tape, bears the genetic code and beauty of this influence. From the string and drum based production by Tema producer Kayso, to the melodic Ga lyrics from Darkovibes, $pacely’s Asante Twi and Pidgin English drawl, and now a music video showcasing the nature and culture of Ghana. The boys are draped in Kente cloth, exploring themes of love, traditional marriage ceremonies, and the ‘feel-good’ vibes of highlife-inspired music, an expansion of the collective’s discography, in a video shot by ace director David Duncan.

‘Reveal’ breaks down a love that only blooms when it is expressed. In the opening lines, Darkovibes belts on in Asante Twi for his lover to “reveal herself to him and show him that she loves him”.

Darkovibes himself is expressive of his love for his girl. He mentions the physical implications of not having her around, such as his hair locking up, back aches and sleepless nights. This is a subtle jab at the current generation who is afraid to show deep affection and love, but not physical. ‘Reveal’ not only explores tradition, but also youth culture. The need to document relationships and moments is seen in the lines, “pose for my polaroid”.

Technology makes a strong case for the spotlight in this song. The striking lines “fly you out in my drone” may seem strange, however it is a show of technological advancements with the recent Emirate Airline’s announcement of chauffeur-less drone transport within Dubai and the DXB, and its relation to wealth

Fly you out with my drone! https://t.co/HAleM8pU2c

The video for ‘Reveal’ takes place in the picturesque town of Aburi and the historic Boti Falls. A tale goes that the two adjacent waterfalls, one larger than the other, represent a man and woman. Although they fall into the same base, their waters are said to never mix except for in the rainy season which brings high volumes of water. In this period, the two falls meet in a ‘mating ceremony’ and are graced by a rainbow. The choice of location plays into the themes of the song and conversations of culture around it.

Although the video depicts a traditional village setting, complete with clay buildings, the attire of our protagonists Darkovibes and $pacely are fashion forward. Moving further than the typical depiction of culture in the form of clothing and dance, the group showcases the beauty of a traditional marriage in the video. After wooing their women, we see RJZ bless a marriage between $pacely and his partner in full ceremonial attire; traditional cloth hanging elegantly off his shoulders, and the ritual first drink by the house head, or ‘efeiwura’ in Twi.

In ‘Reveal’, La Même Gang displays an understanding of their heritage. The video shot by David Duncan echoes this same message. 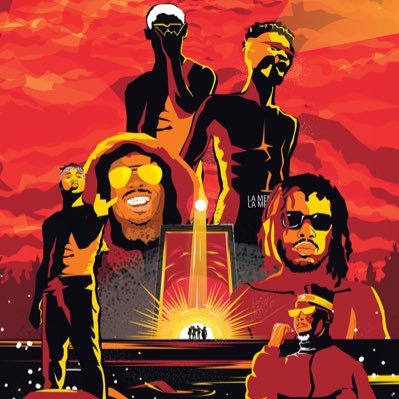 La Même Gang’s ‘Crusade’ headline shows have consecutively taken the alternative Ghanaian music scene by storm for three editions straight. The ‘Reveal’ video ends with a announcement/save the date for Crusade 4 which is set for December 20th. The event has quickly become a cultural highlight for December period in Accra, and we now wait in anticipation for what this year will offer.

Here’s a retrospective playlist, curated by Harmattan Rain, with songs that correlate and affirm the sounds we hear in La Même Gang’s  ‘Reveal’. The playlist explores the interplay of global genres on local Ghanaian sounds, with each selection based off styles that mix hip-hop or western instrumentation with traditional beats, a practice born out of highlife and hiplife music.

The anthem “bros before hoes” is a constant reminder of the bond of brotherhood. A very